Orange you glad they don’t practice on you?

Evidence of tattooing skin has been found as early as 3370 to 3100 B.C. on famous Ice Man, Ötzi, and to more well known historical examples like the ancient Egyptians. Though the equipment to tattoo was much less advanced than today’s tools—using sharpened points in metals and wood compared to the modern-day tattoo gun—the practice of permanent body art has been around for centuries.

Did you know that in 1961 tattooing was illegal in all five boroughs? The reasoning for the outlaw was in regards to fighting against the spread of Hepatitis B. And though it goes without saying, obviously there were still practitioners tattooing “prohibition-style.” It wasn’t until tattoo artists started rallying together to legalize the practice in places where it was banned that the law got lifted 21 years later.

And even though tattoos were still technically “illegal” until the 90s in New York, tattoos began rising in popularity and acceptance in the United States during the 70s. In the era of the 70s, public figures began showing off their own tattoos which resulted in a broader public acceptance of the art. People began to realize that if their favorite icons and inspirations had tattoos, maybe it’d be alright if they did too!

It’s inevitable that certain stigmas still surround tattoos today but they have lost a lot of their taboo reputation in many progressive cultures. Time is effectively washing away those stereotypes bit by bit and making an accepted space for tattoos in the world.

After understanding more about the history behind tattoos, it’s important to understand the techniques behind them. One can’t simply state they want to be a tattoo artist and immediately begin working; like all creative fields, there’s a process, a ladder to climb.

For many industries, interns and apprentices like stylists might have to do bitch work and run errands, assistant photographers might be responsible for the entire studio setup, but for apprentice tattoo artists they’re handed a piece of fruit. Yes, a plump, juicy piece of fruit!

Artistry fields vary in technique, tools, and the medium in which they work. For painters it’s canvas but for tattoo artists it’s skin. So in order to effectively practice an artist’s ink skills, they can’t do their trials and tests on a medium unlike the one they will eventually work on; they need textures that closely resemble human flesh. That’s where the fruit comes in.

Not too many people are willing to let those just learning to tattoo risk eternally ruining their body. Some artists might have supportive friends, but are they really willing to let you fuck up practicing on them, probably not.

To prevent this risk and exercise the art that will last a lifetime on the skin of a client, practice must be done on fruit. From melons, lemons, oranges, to bananas, the fruit helps artists practice different techniques of tattooing due to their similar texture to human skin.

From Grapefruits to Bananas

It’s easier when the client’s skin is taut and steady to successfully tattoo. However, not all skin is the perfect landscape for success. Fruits have curves just like human skin which makes them harder to pull flat and keep steady just as it is difficult to do with skin. Therefore, practicing on fruit creates an educational opportunity to experience what it might be like when the apprentice actually begins working with human skin.

Those practicing on fruit can actually peel back the skin of it and determine if the ink reached the actual meat of the fruit beyond the peel. If the ink has surpassed the skin of the fruit, the artist then knows that they have gone too deep. Going that deep into actual human skin could severely damage the client. From then on, the artist will know to ease up on their needle’s depth in order to avoid the same mistake.

Each fruit works better for practicing different techniques. For example, honeydews are great for linework but terrible for shading. If the artist wanted to practice their shading they might grab an orange or grapefruit.

There are alternative methods to practice tattooing other than fruit ranging from the use of pigskin to artists even practicing on themselves (less pressure and guilt if you fuck up on your own skin). However, the fruit is a good starting point to begin training.

No matter how much practice goes into it, many tattoo artists claim that nothing is quite the same as working on true human skin. Nevertheless, artists should still try one of the aforementioned practice methods to get as close as they can to understanding the techniques the art requires. 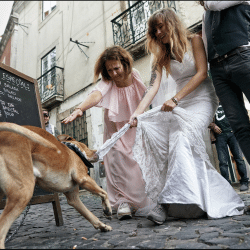 Everything was beautiful and nothing hurt 💛 Whi

This man woo-walked first so all of us could. tdot

I wanted to draw this whole Paati and Kaaka (old l

A look into life through my lens!⁠ .⁠ I've bee